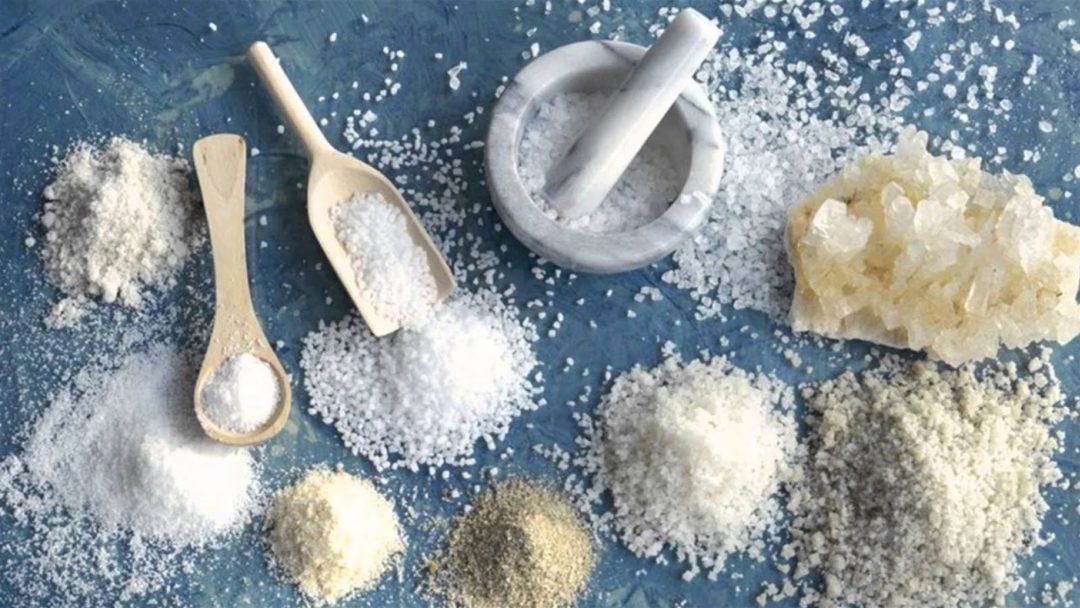 Now that salt has its own aisle at the grocery store, you might find yourself wondering which type to buy. Taste, texture, additives, natural minerals, and health benefits are all factors in deciding which salt to stock your pantry with. From basic table salt to the flakiest sea salt, the options are endless, and they each serve a great purpose in your kitchen.

Keep reading to learn a little more about our favorite salts. 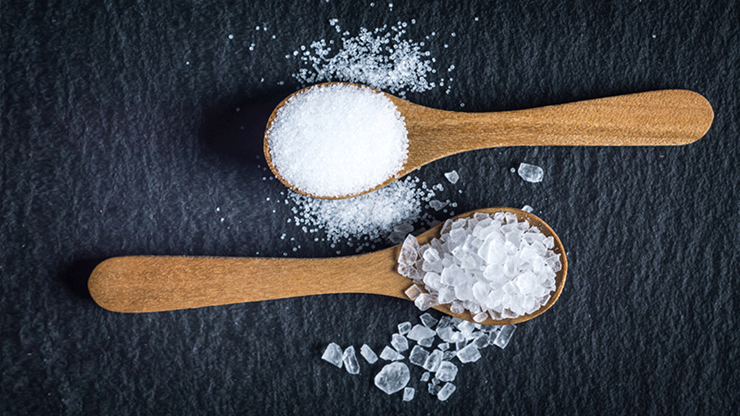 Before we jump in, I want to point out an important tidbit about salt. Regardless of which type of salt you choose to use, the amount of sodium in each salt is the same.

Unrefined salts will advertise their salt being ‘healthier,’ but this is due to the presence of trace minerals and elements. These may have added health benefits. But, in regard to health and salt intake, sodium is the main factor. And every grain of salt has the same amount of sodium!

This is good news, though. This means you can choose your favorite salt based on the best flavor! The health implications are the same either way, so eat something that tastes delicious! Image via The Kitchn

Table salt is the most common kitchen chemical. Little cartons of table salt have stocked our pantries for centuries! Table salt is an ingredient in just about every recipe from spaghetti to brownies, but we seldom think about what it is or where it comes from.

Table salt can be harvested from rock (halite) or from evaporated sea water. Once it’s gathered, it is purified and refined, removing natural minerals. The result is a pure white, fine grained salt.

Then come the additives. The most common is an anti-caking agent. This allows the salt to pour easily from the shaker. Typically this is calcium silicate or calcium carbonate, though there are an assortment of options.

Iodine is another common additive. Being a mineral naturally found in seafood, there was a time when not enough was being consumed. Iodine deficiency can lead to goiters, which was a common problem during World War One. Being that everyone used salt, they began adding iodine to salt to increase iodine consumption on a national level. And it worked! The amount of goiters decreased dramatically! Generally our diets are more diverse now days, so its likely not necessary to consume iodized salt, but they keep making it anyway!

“Double-fortified” salt contains both iodine and iron. Sometimes fluoride or folic acid are also added to table salt, though it is less common.

The additives in table salt can affect the taste of your food. The flavor is not quite as pure and can easily overwhelm the food, making it easy to over salt the flavor.

Table salt is typically used during the cooking process, as it dissolves easily and evenly. The fine grains are also great for baking, as they mix in evenly. Table salt is common for good reason – it mixes well and it is least expensive type of salt. Table salt has been around forever and it’s not going away anytime soon. Image via The Epoch Times

This coarse-grain salt has recently taken over the culinary world. The size of the grain is easy to grab and easy to see when adding it to food. Instead of leaving the salting process up to the mercy of a salt shaker, chefs can accurately control their salting by adding it by hand.

Kosher salt gets its name from its original intended purpose of helping with the koshering process of meat. The large grains of salt help to draw the blood from a cut of meat, making it kosher in Jewish food preparation. But the name has remained and the word “kosher” simply refers to a large grain of salt. The large flakes of kosher salt are craggy and don’t sit tightly together, meaning you need more kosher salt than table salt if you are measuring by volume. Generally speaking, 1 tsp table salt = 2 tsp kosher salt. If a recipe calls for kosher salt and you only have table salt, just halve the amount of salt called for.

Kosher salt is best used to develop flavor while you’re cooking. A pinch here and there throughout the cooking process, will give you the best result, with a  rich developed flavor, rather than the over-salted bite we want to avoid. These fancy salts are harvested from rivers and oceans around the world. Depending on their geographic location and chemical composition, they can vary in size and texture, as well as color. Their unrefined crystals have a pure and bright flavor, which adds a great boost to any food.

The process for harvesting sea salts is more labor intensive, resulting in a higher price tag. They’re best saved for use as a finishing salt. Let their flavor stand out on top of your food, as your tongue hits them. Himalayan salts are harvested from the Punjab region of Pakistan and are pink in color. Said to contain over 80 trace minerals and elements, health enthusiasts claim to see a variety of benefits from consuming Himalayan salts. Fleur de Sel (Flower of Salt) originates from French salt marshes, but is also produced in other parts of the world now. When the conditions of a salt marsh are ideal (sunny, dry, and a slow and steady wind), a thin layer of pyramidal crystals forms as the sea water evaporates. Then, this layer is delicately raked away and dried and packaged. The result is a higher moisture content, allowing the crystals to stick together in snowflake-like shapes. This moisture means the salt doesn’t immediately dissolve on your tongue, letting the flavor linger. Being unrefined, trace minerals and elements add to its flavor profile. Which of these salts are stocking your pantry? Consider trying something new. Your tastebuds will thank you!

Looking to spice things up a bit? Learn how to make flavored salt, here. How to Make a Roux What Bread Pan is Best for Bread? 6 Things to Think about When Choosing a Bread Pan